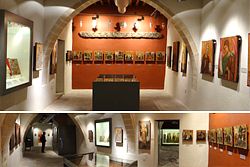 The museum houses a large number of valuable objects and precious treasures of Orthodoxy, saved from earlier generations, who in turn passed on to their offspring.All these works of art exhibited in a specially designed area.

Some of the remarkable items to be exhibited are the following:
• Byzantine icons of excellent craft • Ancient gospels of 1769 and 1728
• Old books, some belonging to monthly editions, from the 16th-19th century. Some old editions include hand-written reminders which are very old
• The golden-embroidered, big Russian Sepulchral
• Big, wooden, graven gilded lamps and stands for the gospels
• Excellently crafted communion cups and other holly vessels like grippers used in the Holly Communion
• Ancient holly canonicals, belt fasteners and clerical belts
• Silver reliquaries etc 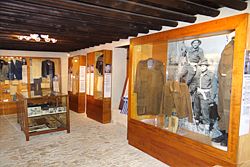 The national liberation struggle of Cyprus against the British colonial administration, known as the EOKA struggle, started on the 1st of April 1955 and ended with the Zurich -- London agreements in February of 1959. The Struggle of EOKA is the culmination of long-standing struggles on behalf of the People of Cyprus in order to conquer their freedom. Omodos was always present in all of the struggles for the freedom of Cyprus. Its contribution dates back to the first quarter of the previous century. With Church Steward Dositheos, from the Holy Monastery of the Holy Cross in Omodos, as the head figure, the inhabitants actively participated in the Greek revolution. Omodos's inhabitants also actively participated in the two World Wars, as well as in the national liberation struggle of EOKA 1955 -- 1959. The contribution of Omodos was great and the price that was paid was heavy. Arrests, imprisonment, the blowing up of a hide-out, and other catastrophes. 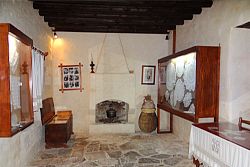 Centre For The Presevation Of Narrow - Knit Lacing

The idea for the creation of the Centre belongs to the Cyprus Handicraft Services of the Ministry of Commerce, Industry, and Tourism. The Service, in collaboration with the Church Committee and the Community Council of Omodos, tracked down, studied, and recorded the way of making the narrow-knit lace and organised a Centre for the Preservation of Omodos's narrow-knit lace ("pipila"). The importance of founding the Centre is great. It is a part of a remarkable collection of lace specimens and aims to preserve traditional folkloric art / craft, the making of lace, and our cultural and historical heritage and to promote to the young -especially the young women - the contribution of Omodos's women to the development of this type of home-made handicraft. 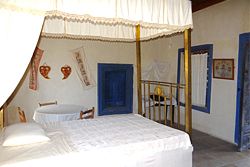 The exhibition is the reminiscence of an unforgettable past for all those that experienced the “old days” and a source of knowledge and promotion of culture and folklore tradition for the young ones. It always holds a special place in the area of exhibitions. 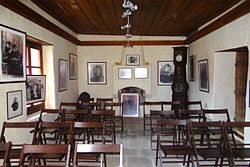 In this special hall one can come across photographs dating back to the 19 th century. In the Photographs' Hall the visitor will gain a genuine and authentic view of the customs and the life in Omodos through the abundant exhibits – traditional landscapes, picturesque streets, landmark buildings, courtyards with flowers, etc., family photographs, group photographs of the life of Omodos's inhabitants, other photographs such as ones of schools, of the first automobile that did the Omodos – Limassol journey, etc. 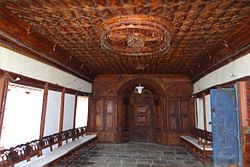 The Museum of Byzantine Icons is housed in the Monastery's Synodicon, which has a wooden sealing of amazing beauty and which was made with excellent craftsmanship, consisted of thousands of small pieces of wood (walnut-tree) that are harmonically fitted together. The Museum of Byzantine Icons was established in October of 1960, aiming to preserve and protect the Monastery's old icons. Priceless Byzantine icons of ancient eras are kept and exhibited in it, as well as age-old, wooden, large, wood-cut, gilt lanterns, all coming from the Monastery of the Holy Cross in Omodos. All the icons have been maintained after contributions by the inhabitants and other friends of Omodos. 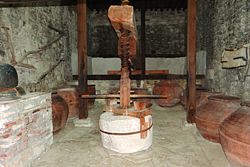 The Medieval Linos at Omodos has been declared as an Ancient Monument and constitutes property of Department of Antiquities, it has been repaired with sponsoring from the Institution Georgiou and Thelmas Paraskevaide and expenses of the Government of Cyprus. Linos is found in small distance by the Monastery of Honest Cross-at Omodos and has an entrance manufactured from engraved arch, like the ones at the monastery. It is accompanied by an oblong, stone-built room that has length roughly 13 meters and width of 5 ½ meters, with level roof manufactured from loft. The floor of Linos is made with flagstones. In the interior and above the entry there is a shaped wooden storage place. On the northern side (right of spect) there is a line of vats, while on the southern side of (left of the spectator), there are more vats and other accessories. Between them there is a cauldron of old type, built from stone and bricks. In the room, in the middle of the lines made from the vats, the grape-pressing mechine can be found. At the back of Linos at about one metre above the floor the "tziathos" is located which is a space where the grapes were separated and further on the bagasse. The internal sides of "tziathos" are covered with plaster. Linos will be protected in the frames of policy for maintenance of our cultural heritage. 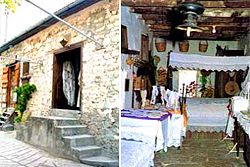 Private Museums exist and are maintained in Omodos, some of them being 100 year old houses, which until this day are kept the same as when they were first built. These old houses themselves are of considerable interest from an architectural point of view, both externally and internally. The Private Museums are specimens of a traditional house in Omodos. They are made of stone and clay with huge, thick walls, wooden doors and tiled roofs, and flower-ridden gardens. In the same areas that people sleep in, there were earthenware jars with wine and -many times -animals also lived there. Signs of harsh times of poverty and deprivation.

One of the recent acquisitions of Omodos's community is the picture Gallery. It is the creation of a permanent collection of Art Works by modern Cypriot painters that have Omodos as their subject. In it are kept the paintings of landscapes in Omodos, inspired by the village.

They are housed in a hall of the Monastery that used to serve -in previous times -as a cell for monks. The establishment of the Picture Gallery started in 1986 with works of Cypriot painters, which were inspired by the natural and human environment of Omodos. Already, there are more than 40 note-worthy paintings and etchings in the Gallery that were offered (free of charge) by their makers -known Cypriot Artists. The "Friends of Omodos" Club and the Community of Omodos have -from time to time -been hosts to members of the chamber of Fine Arts (EKATE), who organised an art symposium in the context of the "ΛΗΝΑΙΑ" (pronounced Lee-ne-a), the four-day celebratory events and exhibitions that are conducted in August every year.

The countryside in Cyprus is blessed with natural and man-made beauty with an abundant historical heritage. Its beautifully unique natural environment is complemented by its traditional villages and architecture which lend it a special character and are always welcoming of visitors in the traditional warm and hospitable Cypriot way. Such an environment imbues a peaceful harmony between humans and nature, something which can be felt as soon as you have arrived in Cyprus and is one of the reasons visitors come here...
Read More 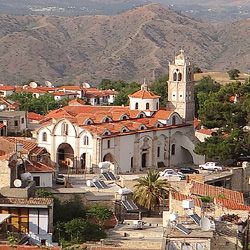 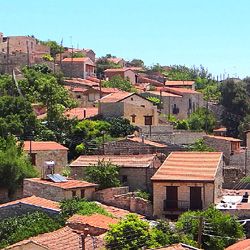 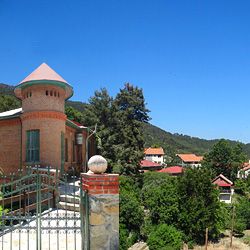 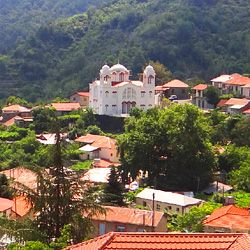 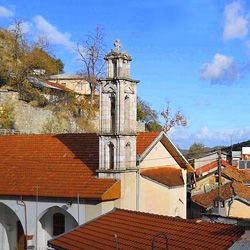 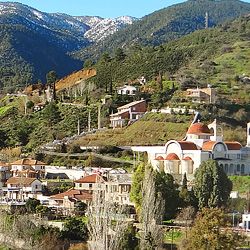 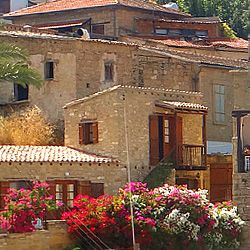 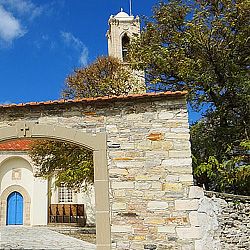 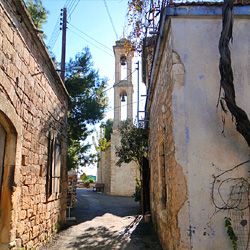 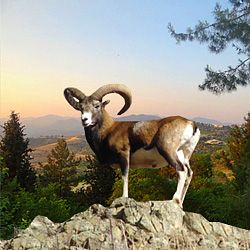 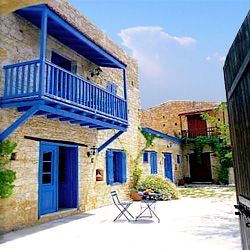 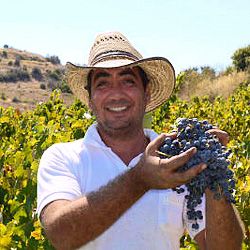 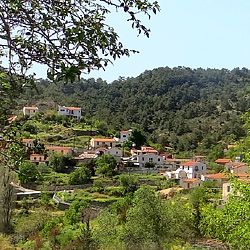 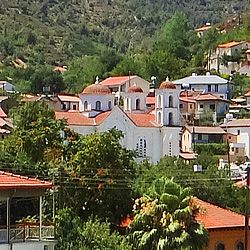 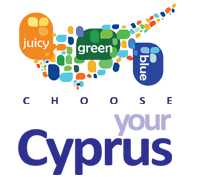